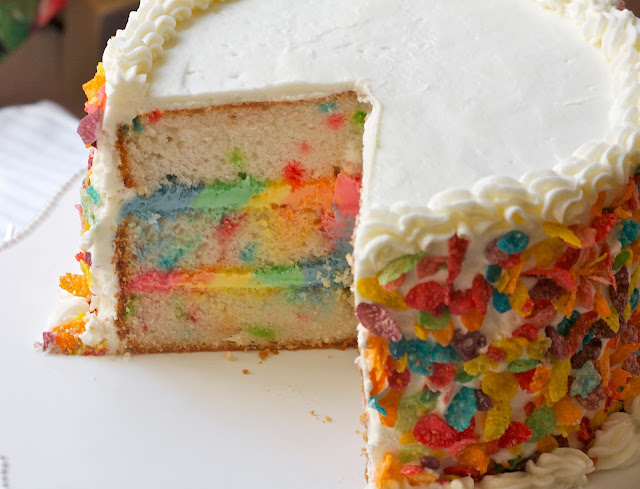 It's Pride Week in NYC! I'm not an extremely politically or socially outspoken person, but supporting a community that promotes love and individuality, even in a really small way like baking, is pretty simple to do. So, what better time to make a rainbow cake?

While there are some freaking exquisite rainbow cakes out there, I knew making a six-layer, mulitcolor cake was more baking time than my sweltering kitchen could afford. And my decorating skills are primitive at best.

So I opted for the rainbow trifecta: Funfetti cake, Fruity Pebbles, and rainbow frosting. The result was a pretty damn elegant cake, with enough color to make me practically giddy.

I used boxed cake mix, because you can't make Funfetti cake without Funfetti cake. It's just not the same. I filled the inside with store-bought icing, but used a home-made buttercream for the frosting (better piping, what can I say). But if you'd rather ditch the buttercream altogether, grab two cans of vanilla frosting. 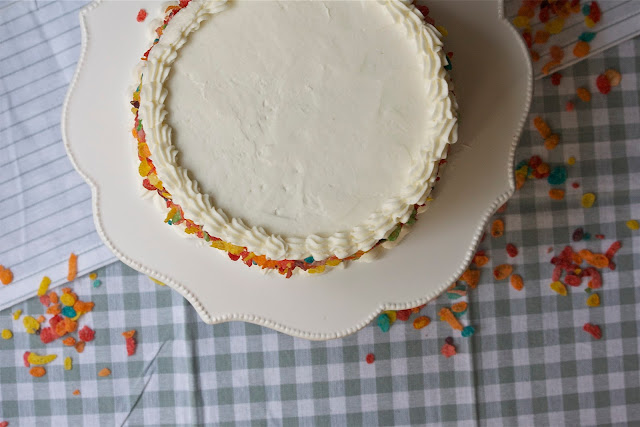 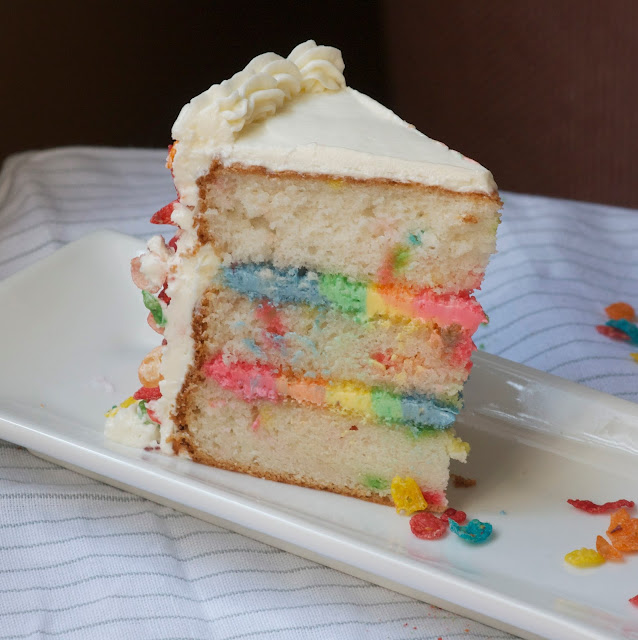 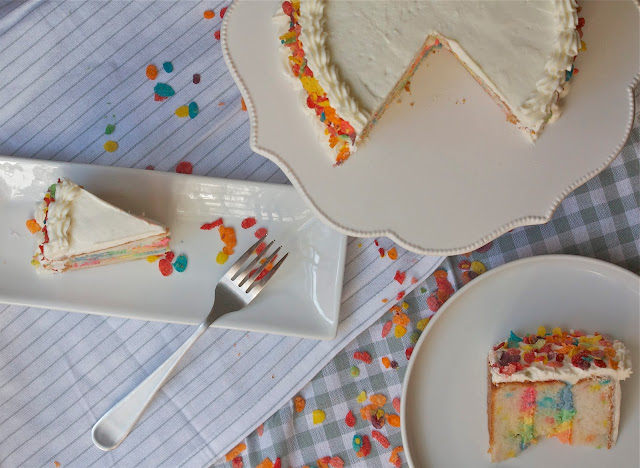 1) Preheat the oven to 350 F. Mix the cake mix, oil, water, and egg whites in a large bowl. Beat with a mixer or whisky vigorously for 2 minutes, until completely incorporated. Split the batter 1/3 to 2/3 between two 6-inch cake tins.

3) When cool, slice off the tops to flatten. Divide the large cake in half, so you have three layers.

4) With the can of vanilla frosting, divide 3/4 of the frosting into five bowls. Color each red, orange, yellow, green, and blue. Scoop the different frostings into ziplock bags and snip off the corners. On the bottom layer of cake, line concentric circles in a rainbow pattern.

5) Place the middle layer on top of the frosting and repeat the pattern, in the opposite order. Set the final layer on top, flat bottom side up.

6) With the leftover white frosting, lightly frost the entire cake. Place in the fridge to set. 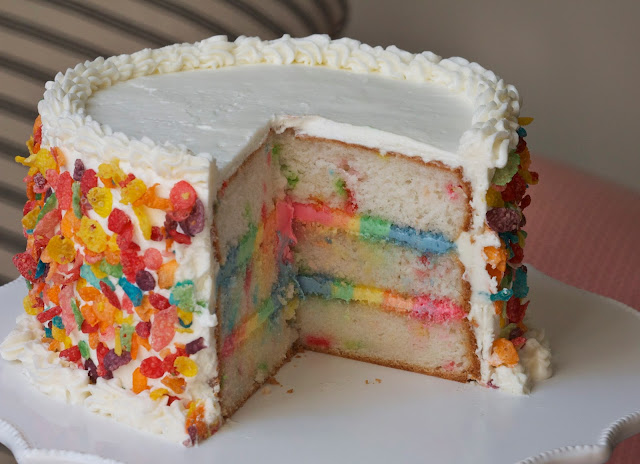 7) Make the meringue buttercream: In a heat-proof bowl, whisk the egg whites and sugar until translucent and warm, and the sugar has dissolved.

8) Beat the egg-sugar mixture in a stand mixer or with a hand mixer on high until glossy peaks form, about 5 minutes. Beat in the butter. If the mixture is still warm and runs, place in the fridge to cool completely, and then beat again another 2-3 minutes, until fluffy.

9) Spread frosting over the set cake. Press the Fruity Pebbles into the sides or sprinkle over the entire thing. Pipe stars or swirls along the side, as desired. 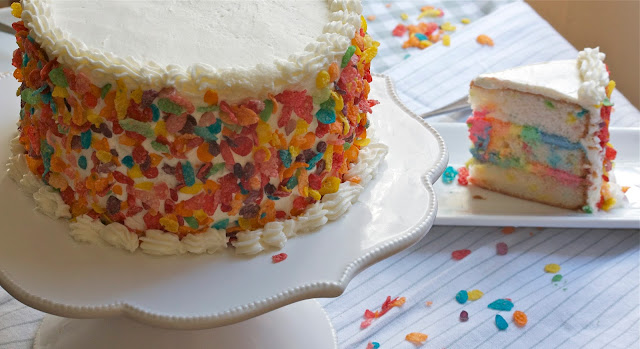 And bam! A freakin' cutie-fruity cake that's simple to decorate and not stacked a mile high. One thing I didn't realize about this cake was how freaking delicious Fruity Pebbles are as decoration! They add crunch and color, but the fruity-sweet taste is incredible! 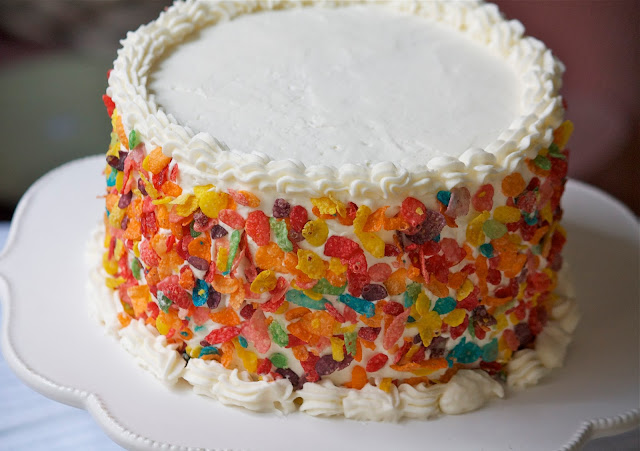 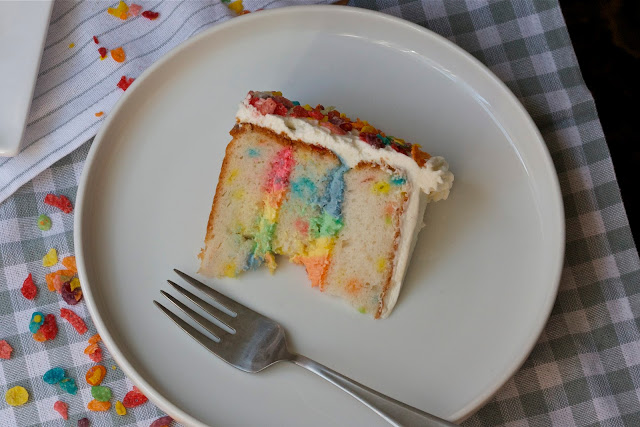 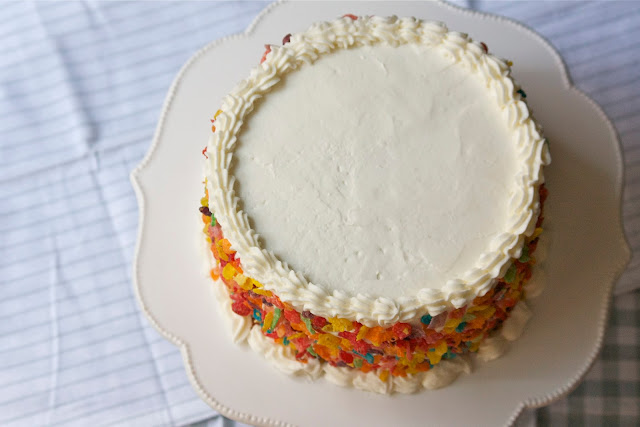