Shanghai : My Trip In Food

Last week I traveled to Shanghai! It was my first time visiting China, or Asia for that matter, and I was eager and a little nervous to see what the city had to offer. Initially two impressions about Shanghai nearly knocked my socks off. First was the enormity of it. Roughly five times the size of New York, it seemed to extend forever; miles and miles of massive sky scrapers and rotund apartment buildings. The other impression was the diversity within the city. Western influences, whether welcomed or not, were greatly expressed in the architecture. In the French Concession and along the touristy Bund, it felt like you could be walking down a road in Paris or Berlin. But the socio-economic variety was more startling in its contrast and proximity. Flashy, glossy sky-scrapers were built next to plastic-roofed houses. This was the view from the hotel one morning:

One of the best parts of the trip (obvi) was the food. Jordan was as excited to show me some of his favorite restaurants, as I was to eat at them. While we did enjoy classic Shanghai food, we also had Japanese, Austrian, Korean, French, and even McDonald's (which I sadly didn't get a picture of).

Here are some of the highlights!

Brunch on my first day was surprisingly familiar. Pancakes and eggs, but in the middle of Shanghai. I think Jordan really missed Western breakfasts, so this was a treat for both of us.

A Yakitori bar consists of small plates served on skewers, which are cooked over an open grille just behind the bar. You can watch the two chefs expertly rotate the food over hot coals. The place was small and filled with mainly twenty-something locals enjoying a quick drink. Highlight of the night was watching the couple next to us expertly debone an entire fish, using chop sticks. We had chicken skin, chicken cartilage (not my favorite), and beef tongue. Along with foaming beer, it made for a really relaxed and fun atmosphere.

We wanted to fully take advantage of the hotel room, so breakfast was served on a tray and eaten in bed. Look at all of the extra things they brought! And those blueberry pancakes were freakin' amazing.

One of my favorite meals on the trip was served at a casual diner. Apparently this style of restaurant, which featured more westernized Chinese food staples, was extremely popular in Hong Kong. Everything was just so good. I tried Milk Tea for the first time (creamy), as well as strange black Ear mushrooms. Highlight of the night: boiled Coke with lemon. It sounds wrong, but was pleasantly warming and sweet. We came for the fried chicken, but I would have come back for the crunchy noodles and pineapple buns. 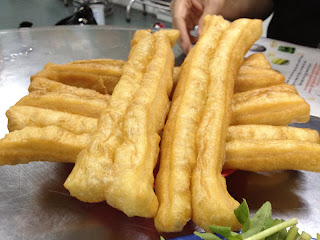 This morning we were lazy and ordered McDonald's. We ordered coffee, hashbrowns, and Egg McMuffins. The breakfast menu varies little from home, except for fried dough sticks. They looked like this:


They were a cross between a churro and a yeast donut, nix any sugar or glaze. Surprisingly, I loved mine. It's friend dough. You can't go wrong.

Jordan lives on a school campus twenty minutes from the city center. Right outside campus was a local noodle shop that is frequented by teachers. Quick, cheap, and delicious. The soup warms you to your toes. I was a huge fan.

Another awesome experience! This is actually more of a chain (there are even locations in New York and LA) but it was a favorite for Jordan, so I was excited to share it with him. All of the food is cooked in front of you, so it was all piping hot. The draw was the 8 Flavors of Pork Belly. From wine to ginseng to curry, they weren't messing around. You were also served a seafood stew. Funnily enough, the only beer they served was Budweiser.

Probably the most zaney and wonderful place on the planet. This chocolate factory is functional, but is mainly centered around its extensive tour. On our private tour, Jordan and I were offered approximately 100 individual pieces of chocolate to taste: ranging from nougat, raw cocoa beans, and the drinking chocolate pictured below.

I  know what this looks like, but I promise we ate other things that day beside chocolate and ice cream. It's just that Haagen-Dazs is a whole other beast in China. Firstly, they're everywhere, and secondly, they're fancy. You can see the flower vase on the table below, but they would also provide you with glasses of water, and usually if you were eating in, a fancy bowl. We got a paper one because they were out of the glass. But the effect was still pleasant. And delicious.

Milk Tea ice cream drizzled with honey, with a scoop of Belgian Chocolate and chocolate pedals. Unseen below is a bed of whipped cream and crushed waffle cone pieces.

We saw Star Wars! In China! Together! So for pseudo-dinner we had popcorn. Movie popcorn in China was odd. It was sweet. Not caramel-y. Just sweet. Very strange.
After the movie, we were pretty hungry. Our popcorn plan didn't work. So we hit up a bar called Liquid Laundry, which felt like it was plucked straight from New York. It was a micro-brewery! Complete with very fancy cocktails and an extensive, almost aggressively American menu.
We ordered the cheese pretzel with mustard, and a side of pepperoni pizza (not pictured). It hit the spot!

For our last night together, Jordan went all out. He booked dinner at a fancy French restaurant along the Bund. He also kept it a surprise. When we arrived, we were seated right next to the window, which Jordan claims was a complete accident.
This was my view:

The entire dinner was amazing. It featured some of the best food I've ever eaten. I'm not kidding.

To start, they gave us what looked like cat food (in a cheeky tin can to boot), but what ended up being a tangy, lemony tuna mousse. It was unbelievable. We hadn't even ordered yet and I was impressed.

Mozzarella Tomato Basil Salad. This. was. amazing. The mozzarella melted in your mouth, and the tomatoes were everything you ever hoped a tomato could be.

Homemade Mayonnaise. Jordan kept this and put it on the second course. I'm pretty sure he wanted to take it  home with him.

Second Course:
Scallops in more delicious sauce. So freakin' fresh!
Lamb shank covered in Almandine crust. The crust made me weak at the knees.
Potato au Gratin, topped with Prosciutto, Brie, and Arugula. Like the brie and prosciutto were an after-thought of fanciness.

Third Course:
Chocolate Torte with Caramel Ice Cream, and a Strawberry Mousse Trifle (which, amazingly enough, had truffles on it!). The mousse melted in your mouth, and there was a flaky sugar cap similar to crème brulee.

Then some after dinner tea, to help us digest all the amazingness.


It was a magical night, made all the sweeter by the company. I wouldn't have wanted to experience it was anyone else.

These are just a few of the crazy meals I experienced during the week! I didn't get photos of a tea seller showing us how to make traditional oolong tea, whole goose carcasses hanging from the rafters at a food market, or Xinjiang-styled eggplant at Jordan's all-time-favorite local spot.

And then of course there were all the non-food events! Museums, circuses, malls, taxi rides, foot massages, fabric markets, temples. All small pieces of the culture we got to experience and share. Jordan went all out to make the trip special, and he knocked it out of the park. It makes the distance so much easier, knowing this great guy is more than worth the wait. All I can say is I love you, and thank you, thank you, thank you.